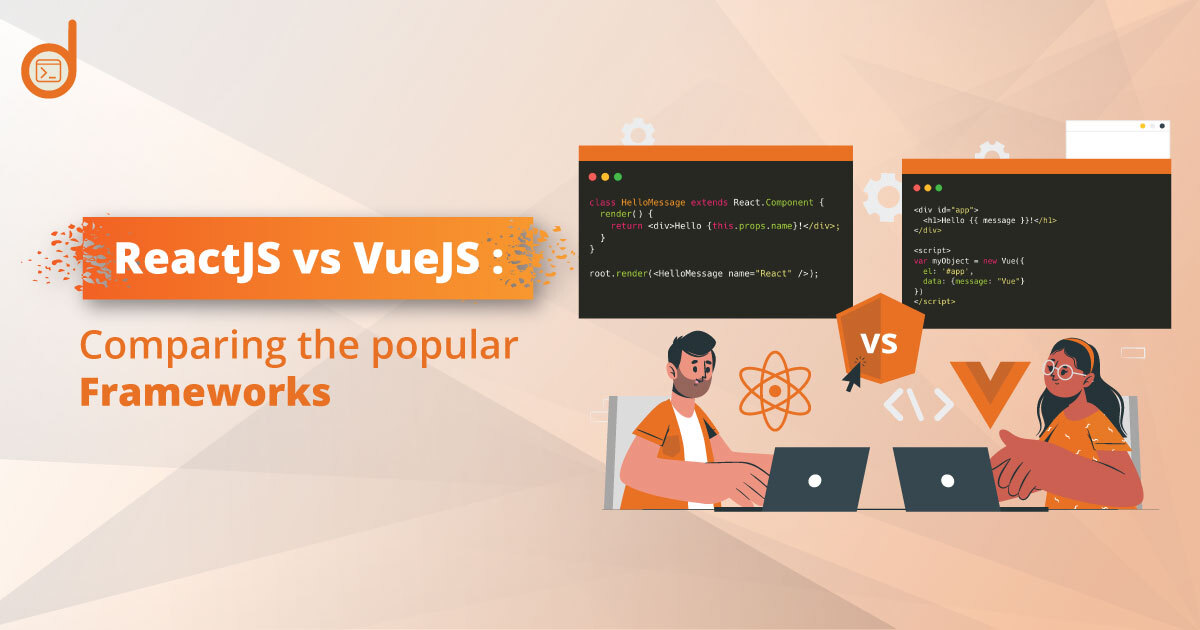 Do you like painting? Are you good at it? Well, whatever the answer is, you will not look for an ax next time you want to paint something. There are specific tools that we use for certain purposes. And while we can be creative and pick up unconventional ways, some lines are still drawn.

Like painting, you need to be attentive every time you pick up a tool and get going. Similarly, when you are a developer or a project manager working on a project, you need to choose the proper framework. However, the scope for this choice is vast.

This choice also depends heavily on several factors. These factors include the learning curve of the language, timeline of the project, performance of a framework, size of the team, etc.

Of course, choosing the proper framework is tricky. So, in this blog, we talk about two JavaScript frameworks in detail, so you know what is better for your project. MarsDevs has compared both of these JavaScript frameworks across various parameters. These parameters include testability, performance, security, developer availability, user experience, etc.

Do you need any professional assistance with any of the mentioned frameworks? In that case, do not wait to let us know. You can look forward to premium quality coding, excellent UIs, and affordability with us. And for the perfect project, you do need the perfect setting. No?

‍What do developers think about React and Vue?

When you look at how the developers see React and Vue, you can decide which of these two is better suited for you, depending on your current capabilities and expectations. There have been reports from 2018 that are evergreen and can be treated as up to date.

Vue.js are Devs' favorite because of the following:

React took up the top spot among the popular web frameworks in the last survey. About 40.14% of respondents chose React. Vue.js took up 5th place with about 18.9% and increasing popularity. The growth is steady, and we can all agree that it's just the start.

‍Why are React and Vue so popular?

Both React and Vue are popular on a developer's landscape. There can be several reasons why they are famous. Some of them are:

Vue is easy to learn but with lesser popularity than React. So, if you need a developer for a complex app that would take less time and start instantly, a React developer would serve you great. However, the talent pool of Vue developers is increasing, and hiring one is getting less challenging with time.

In 2021, reports showed growth of 42.1%, which indicates that Vue.js is gaining more and more popularity within companies. The reports also suggest that around 55% of respondents agree that the favor would keep growing in the organizations within the next 12 months of operation.

‍Use cases of React vs. Vue.

We primarily use React for large-scale web projects. It was created for them, and using it for simple apps can be overkill. React makes the larger projects easier to complete than it actually is for you.

Developers would often argue that React usually requires several bottle plate codes, even if you just want to set up a working project. But that is half of the story told.

React, and its architecture serves significantly in the long run. Developers are left with the JavaScript's full power, including advanced IDE features, such as listing and auto-completion and flow controls in the view template of the component.

React does not have an official package for state management or routing, unlike Vue. And you would need a third-party solution for mostly everything. But, even in that case, the range of choices is vast. As you consult with experienced developers, they will let you know which among the numerous libraries can help you meet all the demands of the business and the web application such Redux, Mobx, Context API, etc.

Vue.js is a popular progressive framework. Depending on its requirements, you can incrementally integrate this framework into an existing project. It is like a lightweight library that adds an interactive side to a web application.

But, did you know about 75% of developers that participated in the State of Vue.js report agreed that the ease of integration is the second biggest asset to Vue? An excellent documentation tops the report with proof that implementing a Vue.js into a project is faster.

Vue.js has a shallow learning curve. That means it is a more accessible language to learn. Even the tools like Vue UI and Vue CLI 3 make Vue excellent for quick delivery of startup ideas or MVPs. Keeping these pointers aside, Vue is an affordable solution for small and medium-sized businesses.

In addition, quite contrary to popular belief, Vue is often an excellent fit for large web applications as well. It has a vast array of companion libraries and tools that allows you to respond to complex needs of applications, including IBM Hybrid Cloud.

‍So, what's the better JS framework for you?

Both the frameworks are remarkable and can suit you well according to your requirements. While you can read blogs for more insights, it might not lead you anywhere as you would need professional help for a reality check. Hiring a team is tricky as it involves a massive question of who would fit right. But, MarsDevs can ease out the process.

MarsDevs has a team of dedicated professionals that can chip in anytime you want. It is a one-stop shop that takes care of all your tech needs. So, you can now focus on business, scale it faster, and automate systems to be more efficient. Book your slot with us to invest in unlocking the code to a competitive advantage. Want to submit the project directly? That sounds great too!