MarsDevs introduces you to Exception Handling in Python 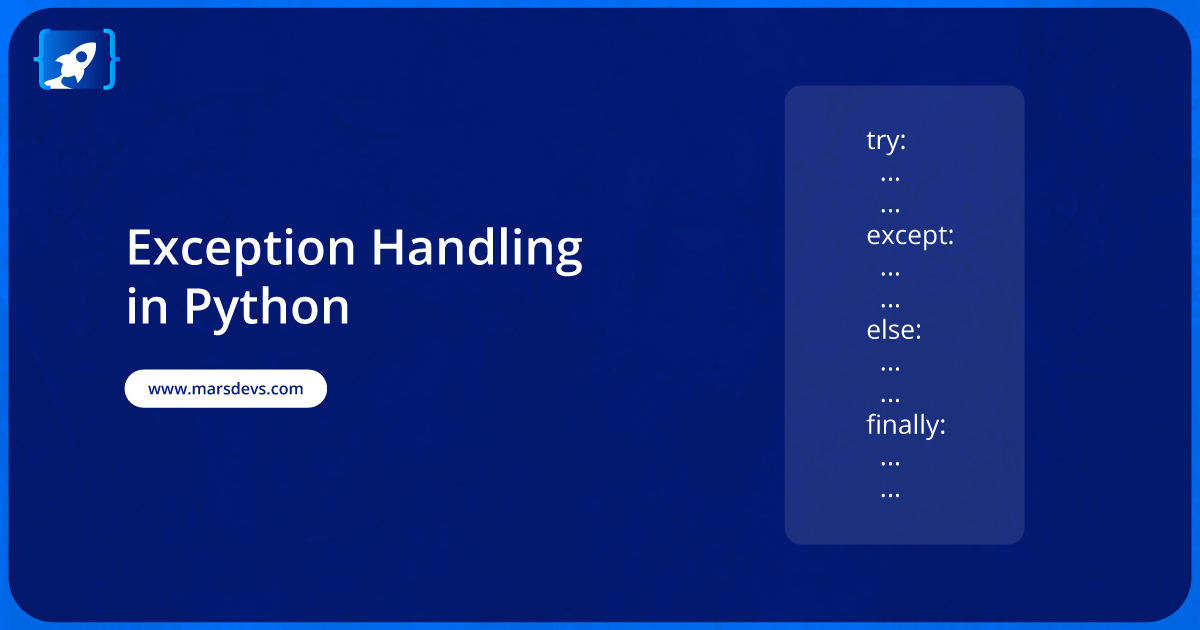 In this article, MarsDevs will present to you what Exceptions are, why they are needed, how exceptions can be raised manually, and how to handle exceptions.

When we try to execute the code, errors might occur. These errors interrupt the normal flow of the program. The Python interpreter often fails to deal with these errors and therefore raises an exception.

Exceptions can be defined as errors found during execution. Exceptions are raised whenever an error occurs in the program. Error handling is needed to prevent a program that ends abruptly.

If exceptions are not handled, the program may go into a crash state. As a developer, it is our responsibility to handle exceptions that occur, such that the program will execute in any case.

There is an unhandled exception in the above code.

Exceptions can be referred to as unexpected behavior of an application or program. It is also known as some interruption in the flow of code. Whatever it is, it is the developer's duty to handle all these exceptions.Python, like other programming languages, is equipped with provisions for handling exceptions. One way is to use try and except blocks.

The try block allows us to write the code which is likely to have errors or exceptions. If any exception occurs then the except block is triggered. In except block developers can control the flow of the program. Thus, helped in handling the exceptions.

You can write any important code inside the try block. The exception block is triggered whenever an expected or unexpected exception occurs (except clause can detect any number of exceptions raised inside the try clause).

In order to get a clear understanding of try & except, let’s consider an example.

The Python interpreter raises an exception as an object that contains information about the exception message and type. Furthermore, every exception type in Python inherits from the base class Exception.

Name of the Exception

To check all exceptions, visit python’s official documentation on exceptions.

As discussed earlier, whenever an exception is raised in the try block, the exception clause will handle it. But it is a good practice to handle or catch all specific types of exceptions, for this we can use multiple except blocks.

Although exceptions are automatically raised during runtime when an error occurs, we can also create custom exceptions using the raise keyword. Any exception that a developer can raise if he needs to break the flow of a program under specific circumstances can be called a custom exception.

But, if you pass a string by first name, it will print accordingly.

Sometimes we need to run the program only when there is no exception, in that case, the else keyword is used with the try clause.

In the above example, since the value of num2 is greater than 0, no ZeroDivisionError is raised and hence the flow of code moves to the else block and the message is no exception.

In this example, since num2 is 0, the flow of code goes through the except block and we get the message exception.

In the example above, we try to access the fifth element of the list, so in addition to handling this error and giving the list index out of bounds exception, the code in the finally block is printed despite the exception.