Functions and Arguments in Python 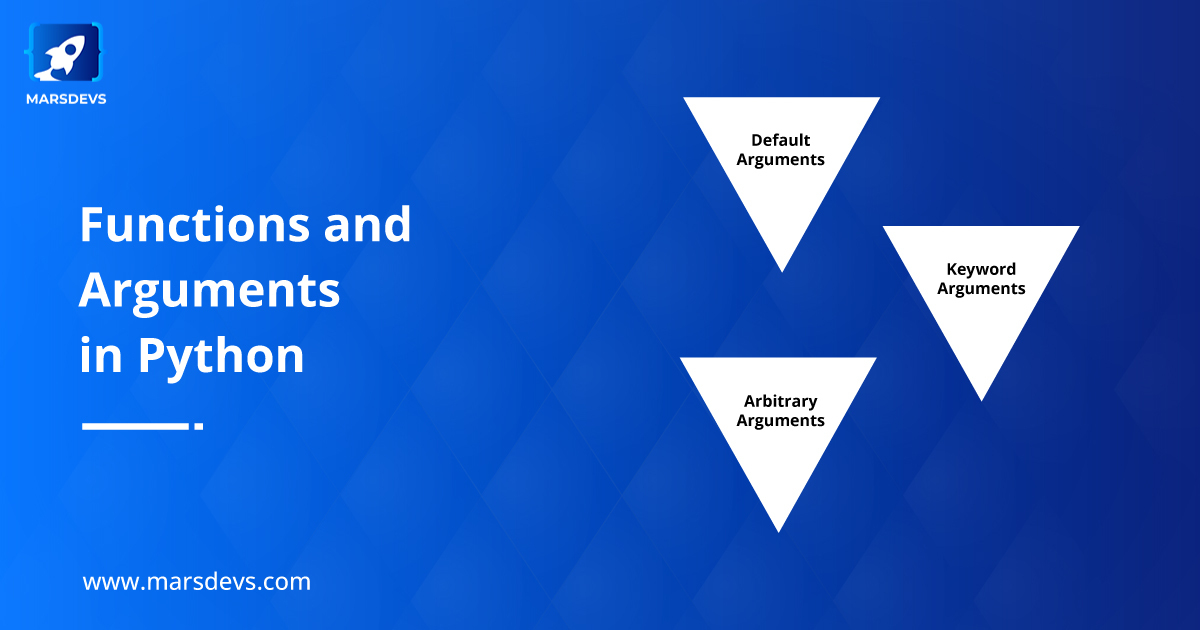 In this article, MarsDevs illustrates functions in Python, the function argument, and the keyword argument. We use various examples with code to understand the concept better.

What do we mean by a Function?

A function is a block of code that performs certain defined operations which can be reused by calling that function. So, a function has a high degree of code reuse capacity and better modularity.

When a function is created, we define the sequence of steps that should be performed and return its resultant or performed value to the caller. We call this function by the name of the function.

Python has already built-in functions like print(), sqrt(), etc. We can also create our own functions, so created functions by users are called user-defined functions.

We can create a function by defining the required functionality into it. We need to remember some rules before creating functions using Python. These rules are as follows

There should be positional behavior to return in the same order as they defined.

The function definition consists of name, parameters required and required step in which manner function should go, then return values, if any.

There are different types of techniques to pass arguments to a function. We will discuss 2 argument passing techniques here: pass-by-value and pass-by-reference.

In pass-by-reference argument passing technique, when we change parameters that are referenced from the caller function within a called-function, the change also reflects back in the calling / original function. This is because addresses of those parameters are passed instead of values to the called-function. Python uses this argument passing technique.

In the pass-by-value argument passing technique, when we change parameters referenced from caller function within a called-function, the change does not reflect back in the calling / original function. This is because only the copies of those values of that argument are passed instead of addresses.

Now, let’s try to understand arguments that are passed to a function. There are various types of functions arguments

These are explained as following below in brief

The above mess() function requires one argument (name) to pass in function, there will be an error raised without it, modified example is given as following below

When you pass these arguments, then the caller identifies the arguments by parameter name. These are not mandatory to pass the arguments or place them in order like required/positional arguments. Python interpreters can identify and match the values with parameters.

If you want to label them in first_name and last_name in the calling-function, then you can label as below

When you do not provide any value for an argument then it assumes a default value (you can set) in the function call for that argument. Take the following example

Note that when you do not know how many a number of arguments should be passed, then we use two asterisks **name, to map arguments to a single parameter. Consider the following example

Recursive function calls, again and again, the same function till the base condition is satisfied or stack overflows / memory overflows.

Consider the following recursive function to calculate the factorial of natural number n.

These functions are defined without a name and use the “lambda” keyword instead of “def”, so these are also called as a lambda function. They return only one value but can have 0 or more arguments.

Syntax is given below

If we were to write above logic using normal function, then it would be

Scope of Variables in Python

There are 2 types of variables, based on their scope - Global variable and Local variable.

An example is given as follows below

These variables are declared inside the function and can be accessed within that function only. These can not be accessed globally.

An example is given as following below

It will not print for the outside x and will raise a NameError: that name ‘x’ is not defined.

Note that when you define both x inside and outside of the function, then it will prioritize local x over global. It means the local variable has a higher priority to access than the global variable if both local and global exist. An example is given below.

A function can not be empty, to avoid any errors we use ‘pass’ statement. Can be used as a placeholder as well.