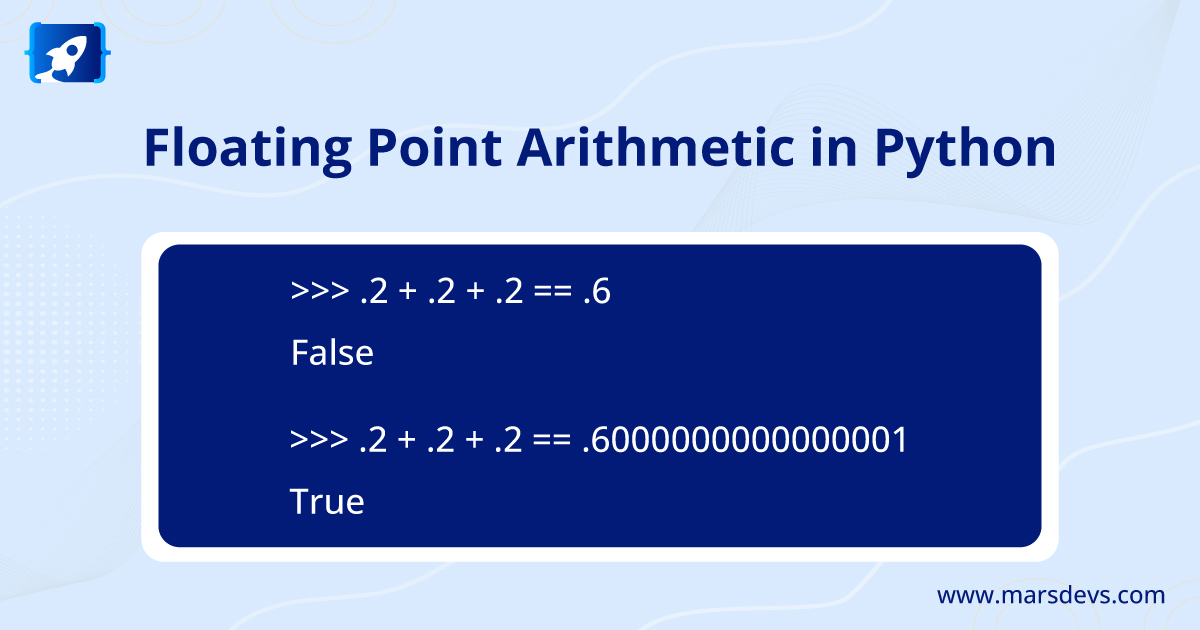 In this article, MarsDevs will present to you what Floating point numbers are, how they are used in arithmetic in Python, and their issues and limitations.

In computer hardware, floating-point numbers are represented as base 2 (binary) fractions.

But not all fractions can be represented exactly as binary fractions. Then you can really only approximate by binary floating-point numbers stored in the computer.

You can take 0.1 or better 0.11 or better 0.111 to represent in the machine. No matter how many digits you choose to write, the result will never be exactly 1/9, but a better approximation of 1/9.

Therefore, you cannot represent exactly 1/9 in a computer or machine, but you can represent its approximate value using a floating-point representation technique.

By choosing any finite number of bits. The most popular representation nowadays is using a binary fraction with the numerator using the first 53 bits starting from the most significant bit and with the denominator as a power of two.

Python simply prints a decimal approximation to the actual decimal value of the binary approximation stored by the machine. Otherwise, on most machines, it prints the entire value in 53 bits.

But it has more digits than most people find useful, so in Python print a rounded value instead.

The decimal value of 0.1 in Python, normally,

Similarly, it also has more digits than most people find useful, so in Python print a rounded value instead.

Note that, even though the printed result looks like an exact value of 1/9, the actual stored value is the closest representable binary fraction.

There can be the same representation for different numbers.

As you noticed there can be the same representation for different decimal values, so the following example is returning false.

But post-rounding with the round() function can help here so that results with exact values become comparable.

For use cases that require exact decimal representation

The NumPy package and many other packages for mathematical and statistical operations can also help with floating point number representation and arithmetic.

The float.as_integer_ratio() method expresses the value of a float as a fraction. It tries to find the numerator and denominator of the ratio of the given fraction.

The float.hex() method is used to express a float in hexadecimal (base 16). It gives the exact value stored by your machine.

Since the representation is exact, it can be ported to different versions of Python Exchange with other languages that support the same format.

The math.fsum() method helps reduce precision loss during summation. It tracks "lost digits" as values are added to the running total.

Representation error occurs when decimal fractions cannot be represented exactly as binary (base 2) fractions. This is the main reason why many programming languages do not display the exact decimal numbers you expect.

IEEE-754 floating point arithmetic is used in almost all computers, and Python supports IEEE-754 "double precision" floats as well. It is 53 bits accurate.

1/10 is not exactly representable as a binary fraction. To round 0.1 to the nearest fraction, it can be in the form J/2**N where J is an integer with exactly 53 bits.

The approximation to 1/10 in 754 double precision is

If we round up in Python

By using decimal and fractions modules